When I first moved to Charlottesville, I had big ideas. First, Eliot was going to stay super busy in baby activities. Second, I was going to buy a jogging stroller and use it (to jog). You can guess what happened to the stroller idea, seeing as I pretty much waddle and eat Nutella by the case.

I took her to a trial baby yoga class. It was trendy and all, but then I got home and realized she does the downward facing dog move on her own when she has to poop. That’s always her signal to me—first a visual clue, then an olfactory blast of old taco meat that confirms my suspicions. She’s made a poo. And at the end of the class, they were all, “My little light bows to your little light.” Elie Mae was like, “Whatevs. Jesus is on the mainline. Namaste that.”

I also took her to a Little Gym class, but it smelled like feet. Why would I pay someone to blow bubbles in her face while she breathes in the stench of old man church socks? I can do that at home.

We went to Bounce ‘n Play, and then I realized we were sitting in my living room only the toys weren’t as clean. And we had to contend with unsupervised, oversized “toddlers” barreling across the room on runaway trains.

We’ve also been to Kindermusik and art classes, but so far, nothing seems worth the money.

So Eliot and I improvised. We moved our class to the bookstore. Take a look.

She gets the gross motor development of The Little Gym by cruising along the bookshelves. Watch out Kindermusik—did you see her drop it to the beat? And as for yoga, she can meditate on why we never buy any of the toys she plays with. As they say on the Guinness commercials: BRILLIANT!

I’m telling you, something happens when you become a mom. A few years ago, I would have been looking over my shoulder for a sales rep, wondering if I was being too noisy, afraid that I would look bad for not buying anything. Now I’ve got this alter-ego thing going on. Like a lactating Samuel L. Jackson without a Kangol. It’s like my voice goes up an octave, I cock my head, and I’m all, “I wish that Nook lady would come over hear and say something to us, Elie.” [Meanwhile, the Nook lady has no idea I exist.] But I keep going. “I mean, why they gonna put these toys here at your eye level and stock them with batteries if they don’t want you to play with ’em?” [Meanwhile, Eliot has no idea I exist.] But I continue. “You know what I mean, Elie? We belong here. Shoot, don’t they know Julian Bond teaches down the street?”

If occupying Barnes & Noble is too gully for you, no worries. I have some other suggestions for cheap dates with your tot:

1) Sample frozen yogurt and then leave.

2) Go to Target. Buy a slurpee. Drink it and leave.

3) Go to Whole Foods. Laugh at the prices. Then leave.

*And for those of you who don’t want to pay $5 per gallon of gas, here are some cheap things you can do in the comfort of your own home: 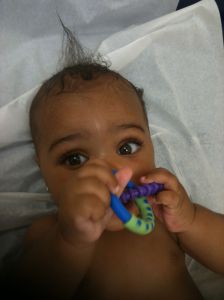 2) See who can look the most startled. 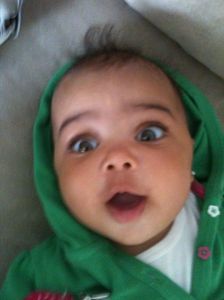 There’s no way I’ve exhausted all the cheap thrills. Leave me a comment and let me know how you and your mini-me save on cash.

4 thoughts on “Occupy Bookstores: Fun on the Cheap”